An application binary interface (ABI) is the interface between a user program and the kernel.

The eXpOS ABI defines the following:

You can read more about the XSM user level instruction set here. 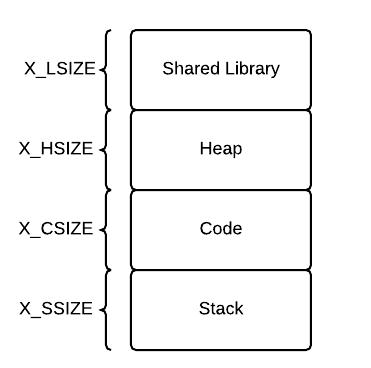 Shared library can be shared by more than one executable file. The maximum size of this memory region is X_LSIZE.

Note : eXpOS provides a library that provides a unified interface for system calls and dynamic memory allocation/deallocation routines. The library is pre-loaded into memory at the time of OS startup and is linked to the address space of a process when an executable program is loaded into the memory for execution if required (as determined by the Library flag in the executable file) . The eXpOS implementation for the XSM architecture discussed here sets X_LSIZE to 1024 words. Thus the shared library will be loaded into the region between memory addresses 0 and 1023 in the address space of the process.

Heap is the portion of the address space of a process reserved as the memory pool from which dynamic memory allocation is done by the allocator routines in the shared library (for example, memory allocated via malloc in C). The maximum size of this memory region is X_HSIZE. Library functions access this portion of memory for dynamic memory allocation and deallocation. The eXpOS execution semantics specify that when a process executes the Fork system call, this region will be shared between the parent process and the child process. The eXpOS implementation for the XSM architecture discussed here sets X_HSIZE to 1024 words. Thus the heap region will be between memory addresses 1024 and 2047 in the address space of the process.

Code contains the header and code part of the XEXE executable file, which is loaded by the eXpOS loader from the file system when the Exec system call is executed. The first eight words of the executable file contains the header. The rest of the code region contains the XSM instructions. The total size of code section cannot exceed X_CSIZE. The eXpOS implementation for the XSM architecture discussed here sets X_CSIZE to 2048 words. Hence, the code region will be between memory addressess 2048 and 4095 in the address space of the process.

Stack is the space reserved for the runtime stack of the process. Parameters and local variables associated with functions in a program are allocated in the stack. In the XSM architecture, the stack grows upwards and the maximum stack size is X_SSIZE. Global variables are normally allocated in the stack as the executable file format does not support a separate Data region. The eXpOS implementation for the XSM architecture discussed here sets X_SIZE to 1024 words.Thus the stack will occupy the region between memory address 4096 and 5119 in the address space of the process.

A description of the user level address space provided by XSM is given here.

Executable files in eXpOS must be in the XEXE format as eXpOS executes only files of such format.

An XEXE executable file in eXpOS consists of two parts:

The maximum size of the file (including the header) is limited by the constant EXE_SIZE. The eXpOS implementation for the XSM architecture discussed here sets EXE_SIZE to 2048 words.

The first eight words of an executable file are reserved for the header which describes the features of file. The structure of the header is :

XMAGIC is a number indicating the type of executable file. All XEXE files will have magic number 0. For more on Magic Number, click here.

Entry point contains the virtual address in memory of the first instruction to be executed (entry point) of the program after the OS loader has loaded it. During loading, the program counter must be initialized to this address.

Text Size, Data Size, Heap Size and Stack size indicates the sizes of Text, Data, Heap and Stack regions to be allocated by the OS loader when the file is loaded for execution.

Note : The present eXpOS virtual address space model requires that the data and stack must be in the same memory area and must be managed by the compiler / application program (this means that the program must contain the code to initialize the value of the stack pointer). The value of Data Size field is ignored. Moreover, the eXpOS loader (exec system call) sets the size of text region to 2048 words and stack region to 1024 words in memory irrespective of the values present in the header.

If the Runtime Library must be included when the file is loaded, the Library Flag is set to 1 in the executable file. If this flag is not set then neither memory is allocated for the heap nor the library linked to the address space of the process by the eXpOS loader at execution time.

In summary, the eXpOS loader maps an executable file into its virtual address according to the following table :

* If Library Flag is set to 1 in the executable header.

** The eXpOS loader sets IP to the value specified in the program header.

† The eXpOS loader does not gurentee that the values of SP and BP are initialised to the base address of the stack region. Hence the executable program must contain code to initialise these registers.

For an application program, there are two stages in executing a system call:

A system call invocation using the high level application programmer's interface of a programming language like ExpL compiles to a set of machine instructions (see the instructions to the left). They are the stack operations that must be performed by the user program before the INT instruction is executed. 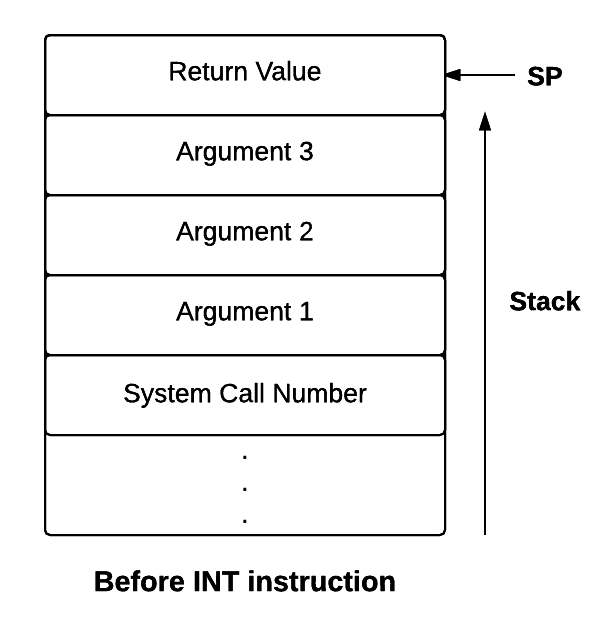 The arguments must be pushed into the stack in such a way that the last argument comes on the top. An additional push instruction ('PUSH R0') is inserted to have an empty space in the stack for the return value. The system call implementation must ensure that the return value is stored in this space. The system call number is also pushed to the stack. The interrupt routine needs this value to identify the system call. The figure to the left shows the data stored in process stack just before an INT instruction. 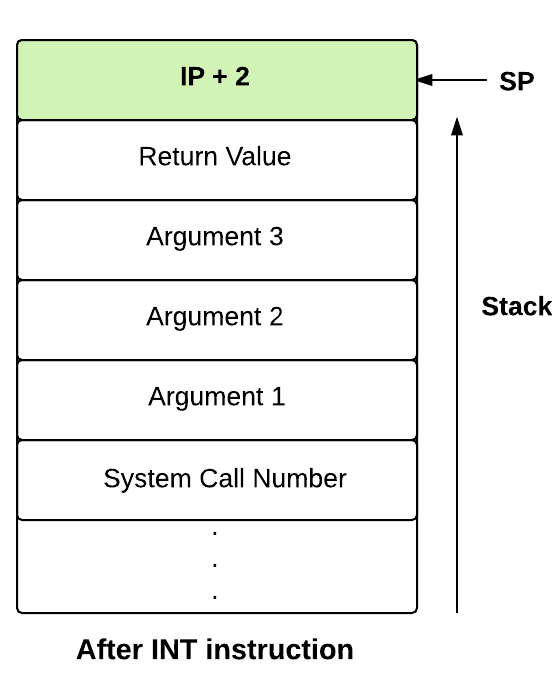 
After return from the system call

The machine code to the left pops the values from the stack. The system call number and arguments were inputs to the system call and hence they may be discarded now. The return value which is stored in the stack by the system call is fetched and used by the user program by popping out to some register.

System calls and their translation

Mapping of system calls to interrupt numbers and corresponding system call interface specification with details of arguments and return values of system calls are given in the eXpOS Low Level System Call Interface Documentation.

The library provides a uniform interface through which an application program can invoke system calls and dynamic memory allocation / deallocation routines by providing the function code and the arguments. The interface hides the details of the interrupt service routines corresponding to the system calls from the application, thereby making them architecture independent. The library also provides user level routines for dynamic memory management (allocation and de-allocation) from the heap region of the application. 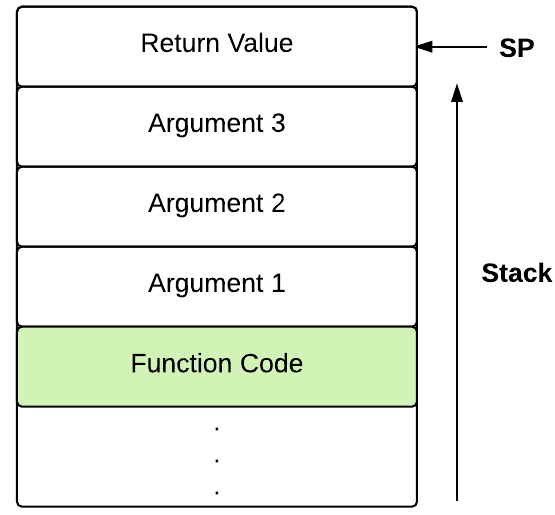 The invocation details for the system calls and the dynamic memory management routines using the library interface can be seen in the eXpOS High Level Library Interface documentation.

A library module invocation using the high level application programmer's interface of a programming language like ExpL compiles to a set of machine instructions (see the instructions to the right). They are the stack operations that must be performed by the user program before the CALL instruction is executed.

After return from the library module

The following machine instructions are present after the CALL instruction in the ExpL compiled machine code given in the previous step.
The machine code to the left pops the values from the stack. The function code and arguments were inputs to the library module and hence they may be discarded now. The return value which is stored in the stack by the system call is fetched and used by the user program by popping out to some register.

Note:If application programs are written in a high level language like ExpL, the exposcall() function will be used to make system calls/invoke dynamic memory routines. The programmer does not have to worry about the library interface specified here because the ExpL compiler will automatically generate assembly code that translate the high level call to a low level call to the library using the above interface and retrieve return values from the call. eXpOS pre-loads the library into the memory at boot time. The library re-directs system call requests to the OS through the low level system call interface. Dynamic memory mangement functions are implemented as part of the library itself.